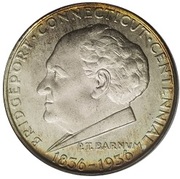 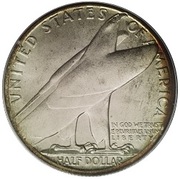 A modernistic interpretation of an eagle.

The 1936 Bridgeport Centennial Half Dollar was issued for the 100th anniversary of the incorporation of the city in Connecticut. The city had actually been founded almost two centuries early in 1639 but had remained unincorporated.

Designs for the commemorative coin were by Henry Kreis, who had also designed 1935 Connecticut Tercentenary Half Dollar. The obverse features a portrait of Bridgeport’s most famous citizen, P.T. Barnum. The well-known entertainer, showman, and philanthropist is remembered for his circus, museum, and the promotion of numerous celebrated hoaxes.

Distribution of the Bridgeport Half Dollars took place through Bridgeport Centennial, Inc. at a cost of $2. The authorizing legislation had specified a minimum mintage of 25,000 pieces, which was the actual number minted with a few additional pieces for assay. After the majority of the mintage was sold at the full issue price, a remaining quantity was wholesaled at a small premium to face value.

The 1936 Bridgeport Half Dollar is another readily available issue, even in higher grades. Many pieces, even those encapsulated with high grades, with show abrasions on the wide high points of the coin. On the obverse, this is Barnum’s cheek and on the reverse, this is the eagle’s wing.

Bullion value: USD 7.65 Search tips
This value is given for information purpose only. It is based on a price of silver at 680 USD/kg. Numista does not buy or sell coins or metal.