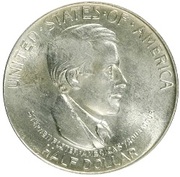 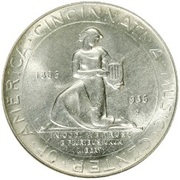 The 1936 Cincinnati Music Center Half Dollar is often cited as one of the early commemorative coins issued for a topic questionable historical significance and primarily for the profit of an enthusiastic promoter. Officially, the coins were authorized to commemorative “the fiftieth anniversary of Cincinnati, Ohio, as a center of music, and its contribution to the art of music for the past fifty years.”

When the designs were sent to the the Commission of Fine Arts for approval, they raised series issues about the design and legitimacy of the commemorative coin issue. They could not find anyone in music circles who knew about the proposed coin. They also presented information showing that the city’s leadership in music could be traced back to 1873, with the May Festival Association organized by George Ward Nichols. The date 1886, which was included on the coin, carried no particular significance. Stephen Foster, who appeared on the obverse of the coin, had no role in the movement in Cincinnati, but only lived there briefly while he was a bookkeeper.

Despite these reservations and the CFA’s outright rejection of the designs, the coins were ultimately issued at their maximum authorized mintage of 15,000 pieces plus additional examples for assay. The production was divided equally between the Philadelphia, Denver, and San Francisco Mint facilities, resulting in extremely low mintages.

The coins were offered at $7.75 for a complete set of three coins, which represented the highest initial pricing for a silver commemorative to date. Very few coins were actually purchased at this price, as the entire mintage was quickly announced as sold out. It is believed that many of the sets were placed with insiders or those close to the issuer, who began offering them for sale at significantly higher prices following the “sell out.”