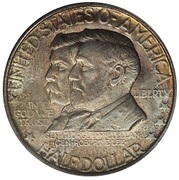 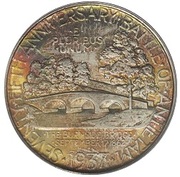 75th anniversary of the Battle of Antietam

The Burnside Bridge, which was an important tactical objective of the battle.

The designs for the coin were created by William Marks Simpson, who had also designed the recent commemorative issues for the Norfolk and Roanoke Island. All of these coins include an unusually large number of inscriptions.

A maximum of 50,000 pieces was authorized to be produced. The entire number was struck at the Philadelphia Mint and sent to the Washington County Historical Society, which offered the 1937 Antietam Half Dollars for $1.65 each. The general market for commemorative coins had declined by this time and sales were slow. Eventually, 32,000 pieces were returned to the mint for melting. Of the three Civil War-themed early commemoratives (Stone Mountain, Gettysburg, and Antietam), the final issue had the lowest mintage.