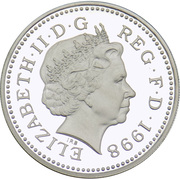 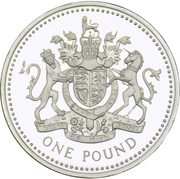 Royal Arms with denomination below

The third edition of the one pound coin in the 'Heraldic Emblems' series. The Eric Sewell 'Royal Arms' reverse design was used two more times on piedforts in the years, 1983 and 1993. Both the 1998 & 2003 coins were also struck in nickel-brass and silver proof.

Bullion value: 16.45 USD Search tips
This value is given for information purpose only. It is based on a price of silver at 936 USD/kg. Numista does not buy or sell coins or metal.