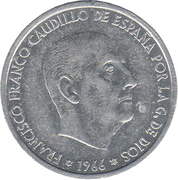 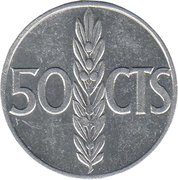 Translation:
Francisco Franco Leader of Spain by the grace of God
1966

One of the errors detected on this coin relates to the stars which state the year in which the coin was made. The second star is sometimes not marked, thus making the coin impossible to date, although today we know most of these coins were made in 1968. This error is known as anepigraphic star.
1967 - there are coins with different letters