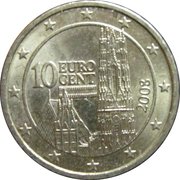 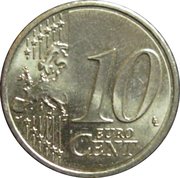 St. Stephen's Cathedral, one of the jewels of Viennese Gothic architecture, is accompanied with the face value and heraldic hatchings representing the Austrian flag and is encircled by the twelve stars of Europe

A map of Europe next to the denomination