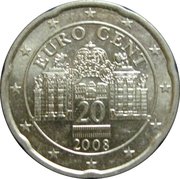 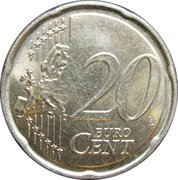 The Belvedere Palace, one of the most beautiful baroque palaces in Austria where the treaty re-establishing the sovereignty of Austria was signed in 1955, making its name synonymous with freedom, encircled by the face value, heraldic hatchings representing the Austrian flag and the twelve stars of Europe around the rim