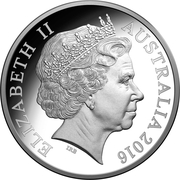 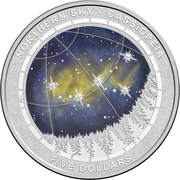 Constellation of Cassiopia in colour above a landscape. Location grid superimposed.

This is the third & final second coin in the three coin series The Northern Sky. Gracing the Northern Skies year round, Cassiopia has fascinated astronomers and storytellers for ages.

Bullion value: 25.13 USD Search tips
This value is given for information purpose only. It is based on a price of silver at 887 USD/kg. Numista does not buy or sell coins or metal.