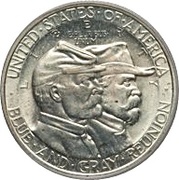 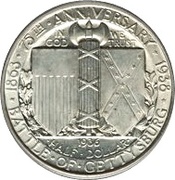 75th anniversary of the Gettysburg battle

Portraits of veterans from the Union and the Confederacy

Frank Vittor was an American sculptor, known for his "preference for the heroic and colossal".

Union and Confederate shields separated by a fasces, a bundle of sticks bound together around a double-sided ax, with sprays of oak and laurel to each side.

Frank Vittor was an American sculptor, known for his "preference for the heroic and colossal".

The 1936 Battle of Gettysburg Half Dollar (Buy on eBay) was issued to commemorate the 75th anniversary of the pivotal battle of the American Civil War. The issue has become one of the more popular amongst the early commemorative coins.

Designed by Frank Vittor, the design for the coin is sometimes described as medallic in appearance. This effect is created by the outer ring containing inscriptions and the exaggerated basining of the fields.

Similar to the Delaware Half Dollar, the Gettysburg Half Dollar is associated with a somewhat confusing array of dates. The coins are issued to celebrate an anniversary that occurs in 1938, however, they were issued in 1937, and dated 1936.

The maximum authorized mintage for the Battle of Gettysburg Half Dollar was 50,000 pieces to be struck at a single mint. The entire number was struck at the Philadelphia Mint and distributed by the Pennsylvania State Commission at a price of $1.65 per coin. In 1938, an unsold quantity of coins was turned over to the American Legion Department of Pennsylvania, who sold the coins for $2.65 each. Eventually, an unsold quantity of 23,100 pieces was returned to the mint for melting.

This issue carries a premium due to its popularity, but it generally readily available. Pieces can be found in gem grades, although many coins will show contact marks on the highest points of the design, the soldier’s faces on the obverse, and the shields on the reverse. With some patience, a high-grade example with minimal distracting marks can be located.

Members from this site want to exchange it: eljunquito52, ronnagley