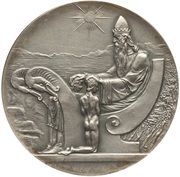 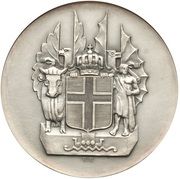 King of Thulé seated on a throne, two naked people knelt down on both sides. Sun, sea and mountains in background.

Icelandic coat of arms surrounded by the four traditional protector spirits ("Landvættir") of Iceland. These are Griðungur the bull, Gammur the eagle, Dreki the dragon, and Bergrisi the giant.

This coin is a part of a series of three, quite emitted in 1930. They are considered, in Iceland, as "semi-official".
Indeed, it's not the government which asked for the strike of these coins, it's a decision of a parliamentary committee, completely official. That is why, after hesitation, these 3 coins were classified under Iceland and not directly in the Tokens section. This coin is also listed in the Schön catalogue.
According to the history, the coins of 2, 5 and 10 Krónur, only the 2 Krónur was able to serve sometimes as means of payment.
They were struck by the Muldenhütten Mint (Saxon State Mint) in Freiberg, Germany.

This value is given for information purpose only. It is based on a price of silver at 752 USD/kg. Numista does not buy or sell coins or metal.

» Buy coins from Iceland at eBay