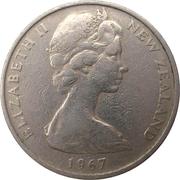 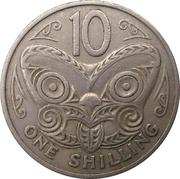 Lettering:
10
J B
ONE SHILLING

From the Reserve Bank of New Zealand website
On the lettering: "The word Shilling was included on the 10 cent coin to assist with the transition to decimal currency, it featured on minting of the 10c coin for the years 1967, 1968 and 1969 and was dropped in 1970. The 1968 10 cent coin minting were for collectors sets only."

On the significance of the Māori design: "Koruru feature particularly strongly at the apex of the gable of a large carved house that was symbolic of the face of an important Māori ancestor from that part of the country. This particular koruru was designed by Mr James Berry specifically for use on New Zealand currency and is representative of designs from various regions."