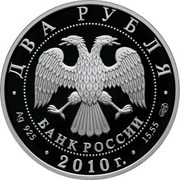 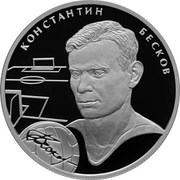 In the centre - the emblem of the Bank of Russia [the two-headed eagle with wings down, under it - the semicircular inscription "БАНК РОССИИ" (BANK OF RUSSIA)] framed by a circle of dots and inscriptions along the rim - on top: "ДВА РУБЛЯ" (TWO RUBLES), below: to the left - indications of the precious metal and its fineness, in the centre - the year of issue "2010 г." (2010), to the right - the fine metal content and the mint trade mark.

To the left - the stylized image of football field, to the right - portrait of K.I. Beskov, below - a football wit his facsimile signature of , above- inscription along the rim: "КОНСТАНТИН БЕСКОВ" (KONSTANTIN BESKOV)

A member of this site wants to exchange it: numimax

Bullion value: 12.89 USD Search tips
This value is given for information purpose only. It is based on a price of silver at 820 USD/kg. Numista does not buy or sell coins or metal.