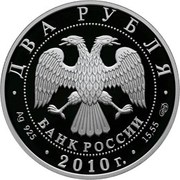 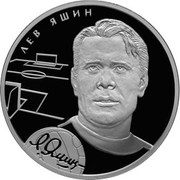 In the centre - the emblem of the Bank of Russia [the two-headed eagle with wings down, under it - the semicircular inscription "БАНК РОССИИ" (BANK OF RUSSIA)] framed by a circle of dots and inscriptions along the rim - on top: "ДВА РУБЛЯ" (TWO RUBLES), below: to the left - indications of the precious metal and its fineness, in the centre - the year of issue "2010 г." (2010), to the right - the fine metal content and the mint trade mark.

To the left - the stylized image of football field, to the right - portrait of L.I. Yashin, below - a football wit his facsimile signature of , above- inscription along the rim: "ЛЕВ ЯШИН" (LEV YASHIN).

Yashin Lev Ivanovich (1929-1990 гг.) - one of the best goalkeeper in the history of world football. Since 1949 and up to end of his sport career in 1971 he played for за Sport-club "Dynamo", Moscow. Since 1957- the USSR Honored Master of Sports, was repeatedly Champion and winner of Cup of the USSR, winner of European Cup, Champion of the Olympic Games (1956). L.I. Yashin was the Hero of the Socialist Labour, decorated with Order of Lenin, two Orders of the Red Banner of Labour, The Olympic Order of IOC and "The Golden Order" of FIFA.

» Buy coins from Russia at eBay