2 Euro Slovak Presidency of the Council of the EU 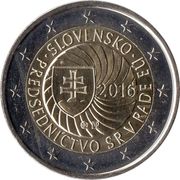 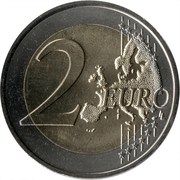 Slovak Presidency of the Council of the EU

The design centres on the coat of arms of the Slovak Republic, shown against a background of dynamic centripetal lines representing the position and importance of the Slovak Republic during its presidency of the Council of the European Union. To the right of the coat of arms: the year ‘2016’. Around the edge of the inner circle: the country name ‘SLOVENSKO’ (Slovakia) and the inscription ‘PREDSEDNÍCTVO SR V RADE EÚ’ (Slovak Presidency of the EU Council), separated by graphical symbols. The mint mark of Kremnica Mint, composed of the letters ‘MK’ between two die, and the stylised initials of the designer of the national side, Vladimír Pavlica, ‘VP’, are in the lower part of the composition. The coin’s outer ring bears the 12 stars of the European Union. 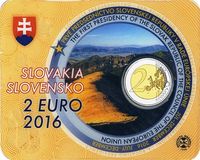 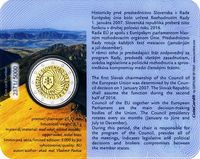