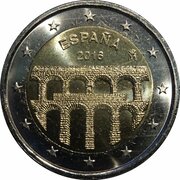 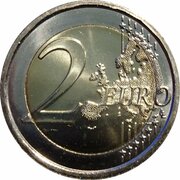 Old Town of Segovia and its Aqueduct

The Roman aqueduct of Segovia, probably built c. A.D. 50, name of the country issuer (ESPAÑA) and date of issue. The coin’s outer ring depicts the 12 stars of the European flag.

Segovia is a city in the autonomous region of Castile and León, Spain and capital of Segovia Province. In 1985 the old city of Segovia and its Aqueduct were declared World Heritage Sites by UNESCO. The Aqueduct, located in Plaza del Azoguejo, is the defining historical feature of the city, dating from the late 1st or early 2nd century CE. Acknowledged as the most important Roman civil engineering work in Spain, it consists of about 25,000 granite blocks held together without any mortar, and spans 818 meters with more than 170 arches, the highest being 29 metres high.