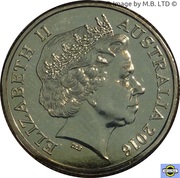 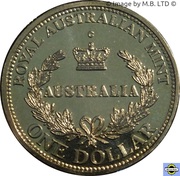 Representation of a Sydney sovereign.

In 2016 the RAM released this NCLT Aluminium-bronze Coin to Commemorate the First Mints of Australia with the design depicting the original Sydney Gold Sovereign.

It was also available with "C" Mintmark from the Public Gallery Press at the RAM in Canberra.

An NCLT Fine Silver (.999) Proof version of the coin was also released in a plush box.