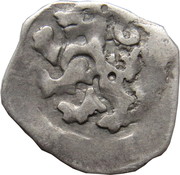 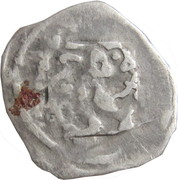 Wolf with a crozier behind (coat of arms of Passau).

Ewiger pfennigs, or Eternal Pfennigs, were minted by towns who wanted to stabilize their currencies and avoid devaluations that lead to large losses to the benefit of the state rulers. Otto von Lonsdorf introduced them in Passau. Passau was a Prince Bishopric of the Holy Roman Empire (999-1803).
Coin referenced in Luschin von Ebengreuth as #263:

The obverse is what is still today the coat of arms of Passau.

» Buy coins from the Bishopric of Passau