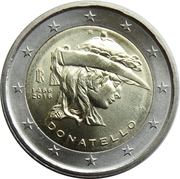 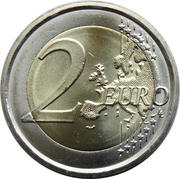 550th Anniversary of the Death of Donatello

Head of the "David di Donatello", the bronze sculpture from the Museum of the Bargello in Florence. On the left side can be seen the monogram of the Italian Republic "RI" and below two lines of the dates of the anniversary. Above the head the mintmark and at right the letters "CM", initials of the designer Claudia Momoni.
The outer ring of the coin depicts 12 stars of the EU flag.

Donato di Niccolo di Betto Bardi - Donatello (Florence, 1386 - Florence, Dec. 13, 1466), was a sculptor, goldsmith and italian designer. During his long career he was one of the three fathers of the Florentine Renaissance, as well as one of the most celebrated sculptors of all that time. 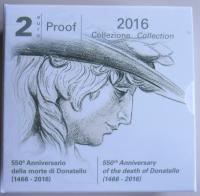