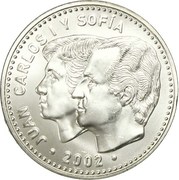 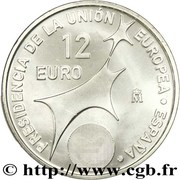 Portraits of Juan Carlos I and Sofia

Official logo of the Spanish Presidency of the Council of the European Union.

Spain began the year 2002 with the premiere of the presidential position, also coinciding with the entry into force of the euro as the single currency, and for this the Official logo of the Spanish Presidency of the Council of the European Union was developed by the study of the Valencian Pepe Gimeno (after imposing his on 10 other proposals presented). The graphic image had to respond to the open, dynamic and warm character of the Spanish and transmit concepts such as evolution and integration. The idea was to turn the silhouette of Spain into a great star that communicates with the rest of Europe, symbolized by the smaller star.

Bullion value: 13.69 USD Search tips
This value is given for information purpose only. It is based on a price of silver at 822 USD/kg. Numista does not buy or sell coins or metal.