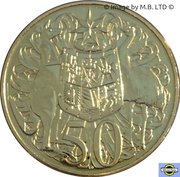 This Gold Plated Brilliant Uncirculated 50 cent coin was issued by the Royal Australian Mint to celebrate the 50th Anniversary of Decimal Currency in Australia. The coin is shaped round, the same as the original 50 cent coin as issued in 1966, and it is also Gold Plated. The coin was issued in two credit card sized coincards.
This first one is the locally issued version... (A special similar open day card was also issued)

This second one was issued for the World Money Fair in Berlin in 2016 with a special Privymark ...