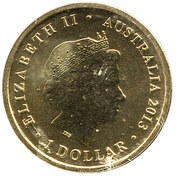 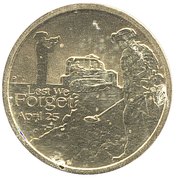 Soldier playing the Bugle. Bulldozer in the background, Soldier sweeping for mines to right.

Lettering:
P
Lest We
Forget
April 25

Fifth coin of the Perth Mints "Lest We Forget" series of Anzac Day coins. Issued in a Coincard.