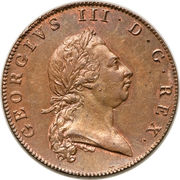 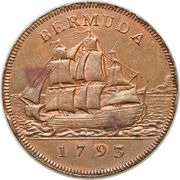 Jean-Pierre Droz was a coin and medal engraver born in Switzerland and trained in Paris. Droz was most known for engraving the Napoléon coin at the Paris Mint.

Sailing ship with land on the right horizon and Bermuda across the top.
Line behind third mast is actually a die clashing and is the King's neckline from the obverse die smashing into the reverse die. Most specimens have this, suggesting the clash happened very early on in production.

During the main production run, these dies got worn out extensively. You can see the die clash behind the third mast. The edge of the dies became increasingly cracked resulting in the flat areas on the edging. By the end of the dies lifespan, they were re-tooled by hand, resulting in a change of lettering to what is termed as "Fancy Lettering" by Mark Sportack. They were then struck for a while longer resulting in a set of these production coins having this changed lettering. 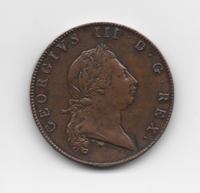 Members from this site want to exchange it: Szavincent, rodmacbr, lefranc