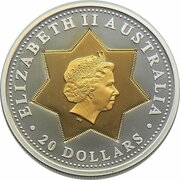 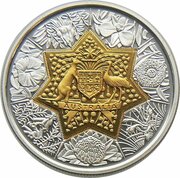 Coat of Arms of Australia at the seven-pointed star shaped centre set on a bed of golden wattle.

Issued by the Perth Mint to celebrate the 100th Anniversary of the Federation of Australia is this $20 fine silver (.999) & Gold(.999) bi-metalic proof coin.

A member of this site wants to exchange it: Zimovsky