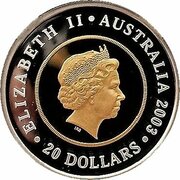 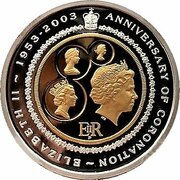 50th Anniversary of the Coronation of Queen Elizabeth II

Four of the portraits of Elizabeth II used throughout her Reign up to 2003 at center; St. Edward Crown and the Order of Garter Collar along the commemorative inscription around the ring.