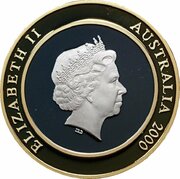 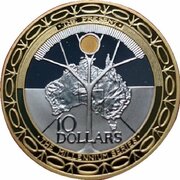 The Millennium - The Present

Australian map behind young tree, value at base of tree, all within circle, surrounded by circle of stick figures and ovals

Released by the RAM as part of a three coin series to celebrate the turn of the Millenium is this Bi-metallic Gold Plate & Silver $10 Proof Coin.