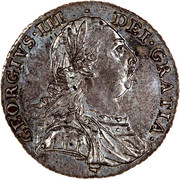 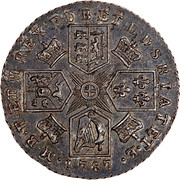 Translation: George III, by the Grace of God

Translation: King of Great Britain, France and Ireland, Defender of the Faith, Duke of Brunswick and Lüneburg, Arch-Treasurer and Elector of the Holy Roman Empire

Coin is identical to https://en.numista.com/catalogue/pieces13154.html. In 1800 the then-Governor of New South Wales, Philip Gidley King issued a proclamation that ten specific British, Netherlands, Indian, Portuguese and Spanish coins were to be brought into the colony and given inflated denominations than what was indicated on the coins so that they would say in circulation in the colony. This page should be used only by collectors who are sure their coins are covered by this proclamation and have reputable provenance and therefore can be considered eligible for inclusion in this Australian Numista listings.

Bullion value: 4.73 USD Search tips
This value is given for information purpose only. It is based on a price of silver at 850 USD/kg. Numista does not buy or sell coins or metal.