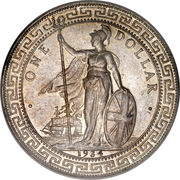 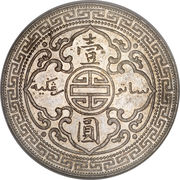 Standing figure of Britannia holding trident and shield with merchant ship in background, date in exergue.

Issued to facilitate British trade in the Orient, the reverse design incorporated the denomination in Chinese characters and Malay script (often found with chop marks which do not detract from the value - see below).

C - Calcutta mint Found between Britannia's foot and the shield; missing on some 1900 issues; 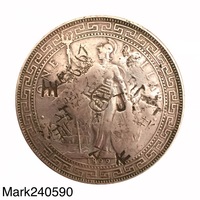 Mintage figures quoted include all varieties for the given mint and year.

A limited number of gold proof restrikes were produced from the original dies but it is not known when or by whom.

Bullion value: USD 16.93 Search tips
This value is given for information purpose only. It is based on a price of silver at 698 USD/kg. Numista does not buy or sell coins or metal.