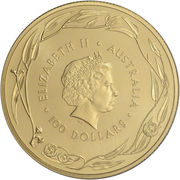 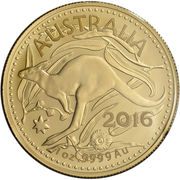 Bounding kangaroo design used on Australian copper pennies, along with the Commonwealth Star, surrounded by leaves, nuts and flowers of a Tasmanian (Southern) Blue Gum tree.

Bullion value: 1,585.78 USD Search tips
This value is given for information purpose only. It is based on a price of gold at 50,990 USD/kg. Numista does not buy or sell coins or metal.