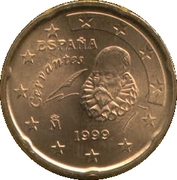 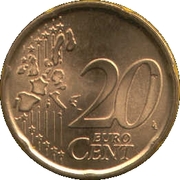 A portrait of Miguel de Cervantes, the father of Spanish literature, is accompanied with his name, a quill, the lettering "ESPAÑA" (Spain) and the mintmark for the Madrid Mint is encircled by the twelve stars of Europe of which four are bound by a band

There is at least 2 types of variations in the Observe for this coin in 1999 in regular circulation:


These variations can be seen in the following images: