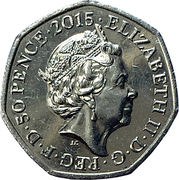 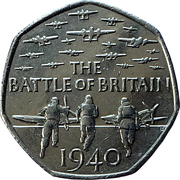 75th anniversary of the Battle of Britain

Flight crew running toward aircraft with aircraft above.

Lettering:
THE
BATTLE OF BRITAIN
1940

There were three distinct types issued for the 2015 Battle of Britain commemorative featuring three different obverses, two different compositions, with just one type being struck for circulation. We are indebted to the numismatic website Change Checker and Numista member Sjoelund for sharing the graphic below: 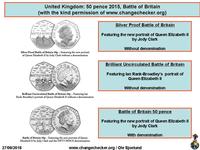 The 2019 issues were not struck for circulation and formed part of the 5-coin British Military set celebrating 50 years of the 50p.