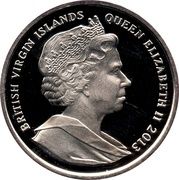 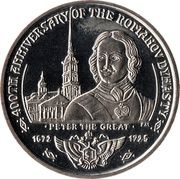 Portrait of Peter the Great with the Peter and Paul Cathedral, located in St Petersburg and built during his reign, in the background.

Peter the Great ruled the Tsardom of Russia and later the Russian Empire from 1682 until 1725.  In many successful wars he expanded the Tsardom into a huge empire that became a major European power. In 1703 Peter gave the order to start building the Peter and Paul Fortress. The fortress was destined to turn into the second “northern” capital of Russia, - the great city of Saint Petersburg. It was declared the capital of the country in 1712 and remained so until the beginning of the twentieth century.

Members from this site want to exchange it: Essor Prof, Numismater