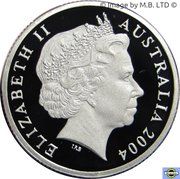 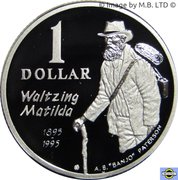 Stylised image of the Jolly Swagman from the song Waltzing Matilda, replete with a swag and walking stick, dressed roughly.

This Fine Silver (.999) Proof NCLT coin was released as Coin #4, part of the 2004 "Masterpieces in Silver" set
This set is recognising 20 Years of the Australian Dollar coin. This coin is a remake of the 1995  coin that celebrated the Centenary of Banjo Paterson's song "Waltzing Matilda".

An Aluminium-bronze and two slightly different Sterling Silver versions of the coin were released in 1995.
This coin has the Fourth Effigy of Queen Elizabeth instead of the Third Effigy used on the 1995 versions.

Bullion value: 6.84 USD Search tips
This value is given for information purpose only. It is based on a price of silver at 587 USD/kg. Numista does not buy or sell coins or metal.