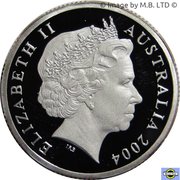 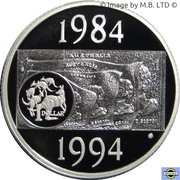 Image of the old Australian $1 note morphing and merging into the Mob of Roo's one dollar coin.

Translation: The numbers are the numbers on the $1 banknote

This Fine Silver (.999) Proof NCLT coin was released as Coin #5, part of the 2004 "Masterpieces in Silver" set
This set is recognising 20 Years of the Australian Dollar coin. This coin is a remake of the reverse of the 1994 Dollar Decade coin which itself commemorated 10 years since the Dollar Note was phased out in preference to the Dollar coin. (However this coin has the IRB Effigy of Queen Elizaeth II instead of the RDM Effigy)

An Aluminium-bronze and two slightly different Sterling Silver versions of the coin were released in 1994.
This coin has the Fourth Effigy of Queen Elizabeth instead of the Third Effigy used on the 1994 versions.

Bullion value: 6.66 USD Search tips
This value is given for information purpose only. It is based on a price of silver at 572 USD/kg. Numista does not buy or sell coins or metal.