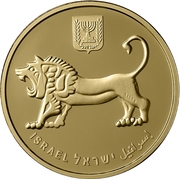 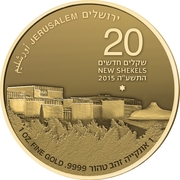 View of the Israel Museum, to the right, the Shrine of the Book on the Museum Campus. In the upper border is the word "Jerusalem" in English, Hebrew and Arabic and to the right, the Face Value, Mint Year and Star of David Mint Mark.

The Israel Museum located in Jerusalem is the largest cultural institution in the State of Israel  and ranked among the world’s leading art and archaeology museums. Founded in 1965, the Museum houses encyclopedic collections, including works dating from prehistory to the present day, in its Archaeology, Fine Arts, and Jewish Art and Life Wings. The most extensive holdings of biblical and Holy Land archaeology in the world are featured at the Israel Museum. Over 50 years, the Museum has grown significantly and has built up an extensive and varied collection which includes about half a million items, reflecting a wide spectrum of culture.
The Museum buildings, which have become an important part of the Jerusalem landscape, were planned by architect Alfred Mansfeld and designer Dora Gad. Together, they are designed to resemble in modular modernism a growing Mediterranean village.

Minted at the Israel Government Coins and Medals Corporation Mint with Star of David's mintmark. 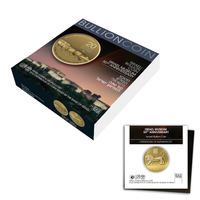 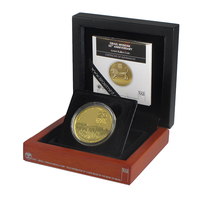 This value is given for information purpose only. It is based on a price of gold at 61 949 USD/kg. Numista does not buy or sell coins or metal.