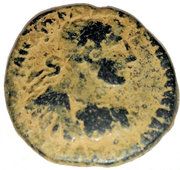 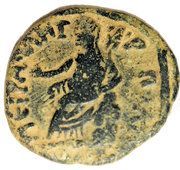 Laureate and cuirassed bust right with aegis on breastplate

In 106 AD, when Cornelius Palma was governor of Syria, the part of Arabia under the rule of Petra was absorbed into the Roman Empire as part of Arabia Petraea and became its capital. The native dynasty came to an end but the city continued to flourish under Roman rule. It was around this time that the Petra Roman Road was built. A century later, in the time of Alexander Severus, when the city was at the height of its splendor, the issue of coinage comes to an end.
https://en.wikipedia.org/wiki/Petra#Roman_rule

» Buy coins from the Roman provinces