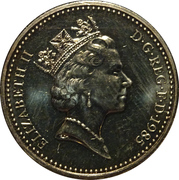 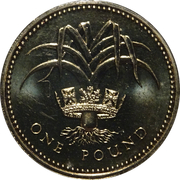 A leek, the emblem of Wales, encircled by the Royal Diadem

In 1985 the Royal Mint released the second one pound coin in the 'Royal Diadem' series, the first with the Maklouf third portrait of HM The Queen. The coin was issued as part of the 1985 Annual Coin Sets in both Brilliant Uncirculated (178,375 sales) & Proof versions as well as individually in a BU pack (24,850 sales). 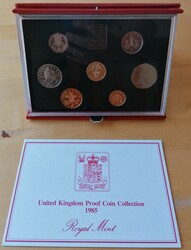 This Leslie Durbin reverse design was repeated one more time on a second edition in 1990, again issued as part of the 1990 Annual Coin Sets in both Brilliant Uncirculated & Proof versions. 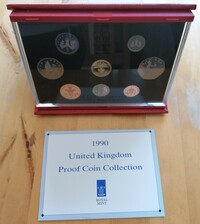 The coin was also struck in silver proof and silver piedfort.