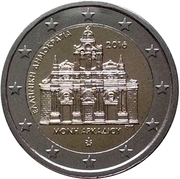 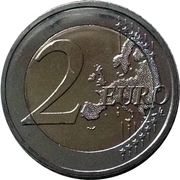 150 Years from the Arkadi Monastery Torching

The design features the Arkadi Monastery. Inscribed, at centre, is the wording ‘ARKADI MONASTERY’ and along the inner edge at left ‘HELLENIC REPUBLIC’, in Greek. Visible at upper right is the year of issuance ‘2016’ and below the central inscription a palmette (the mintmark of the Greek Mint). Inscribed at lower right is the monogram of the artist (George Stamatopoulos). The coin’s outer ring depicts the 12 stars of the European flag.

The heroic decision of the besieged Cretans to set fire to the gunpowder kegs in the Arkadi Monastery on 8 November 1866, was a dramatic climax of the 1866 Cretan uprising. One hundred and fifty years on, this act of self-sacrifice remains a luminous example and source of inspiration for the Greek people.
The coin was issued in bankrolls, in Proof quality in wooden box with certificate of authenticity and in BU quality on a coincard blister. 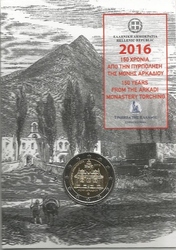 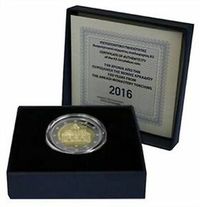