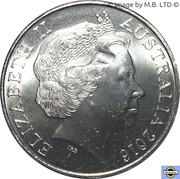 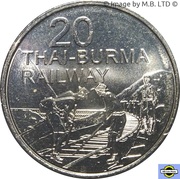 This 20 Cent coin pays tribute to the 22,000 Australians who became Prisoners of War under the Japanese in South east Asia during WW2. Most of them were captured in the fall of Singapore in February 1942. 10,000 of the POW's were forced to work on the construction of infamous Thai-Burma Railway. There they became victims of their captor's indifference and brutality, as well as endemic disease and malnutrition.  An important Australian at the time was Colonel Edward "Weary" Dunlop, a doctor who spent his time in captivity trying to maintain the health and wellbeing of all prisoners. In doing so he became an iconic figure in Australian memories of the Thai-Burma Railway. He was later commemorated on a circulating 50 cent commemorative coin issued by the RAM in  1995.

Members from this site want to exchange it: ybigdan, brismike, chethan2202