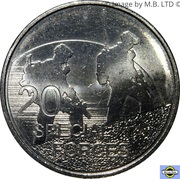 This NCLT 20 cent coin pays tribute to Australia's Special Forces units. The Australian Defence Force has a number of Special Forces and Special Operations Units since their inception in WW2. Commando Units are trained as elite light infantry for quick raids on high-value targets. Reconnaissance and intelligence-gathering units, including M & Z Special Units and the coveted Special Air Services Regiment, have conducted clandestine patrols deep into enemy territory. These units have also recently  carried out a domestic counter-terrorism role. Recent counter-insurgency operations have been conducted in Afghanistan's Uruzgan province. Three members of this operation have been awarded the Victoria Cross for outstanding valour and bravery under enemy fire.

Members from this site want to exchange it: ybigdan, brismike, chethan2202