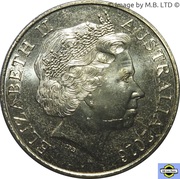 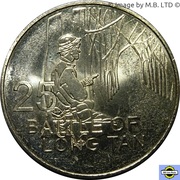 Australian soldier crouching down in Vietnam jungle holding a rifle

This NCLT 25 Cent coin Is one of the first "Quarters" ever issued by the RAM. Although not meant for circulation it is legal tender. This particular coin commemorates the Battle of Long Tan in the Vietnam War. On August the 17th, 1966, the Australian Base at Nui at was hit by mortar and rifle fire. The enemy firing positions were located and the following day D Company 6RAR began the search for the enemy in the Long Tan area. The Australians engaged the enemy in a fierce battle. The larger enemy forces tried several times to overrun the Australians but they held their ground. Eventually with artillery support, a re-supply of ammunition and support from armoured personnel carriers with re-inforcements the enemy were forced to withdraw.

Members from this site want to exchange it: ybigdan, chethan2202