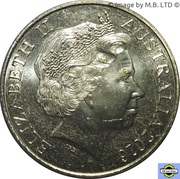 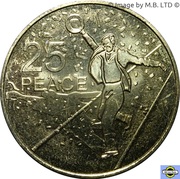 This NCLT 25 Cent coin Is one of the first "Quarters" ever issued by the RAM. Although not meant for circulation it is legal tender. This particular coin celebrates "Peace" at the end of WW2. Three months after the death of Adolf Hitler and the collapse of Nazi Germany in May 1945, Japan surrendered to the Allies and the second World war finally came to an end. When Japan announced its surrender on August 15, 1945, spontaneous rejoicing broke out with wild scenes of celebration in cities across Australia, the mood of which is captured by the dancing man, who to this day remains unknown but was captured on a newsreel of the day. By then nearly a million Australians had served during WW2, 39,600 had died, 23,500 had been wounded and more than 28,000 had been taken prisoner.