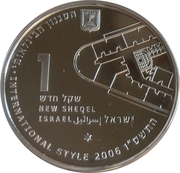 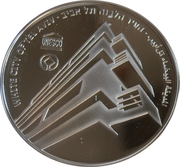 Typical Bauhaus style building shown from corner angle with UNESCO and World Heritage Sites symbols to the left; the words "White City of Tel Aviv" appear along the border of the coin, in Hebrew, English and Arabic.

"The White City" of Tel Aviv was declared a World Heritage Site by UNESCO in July 2003 in recognition of the city's unique, universal significance to be preserved for future generations.
Founded in 1909, Tel Aviv was innovatively styled to meet the climate conditions, daily needs and lifestyle of the era. "The White City" was designed by one of the foremost pioneers of 20th century city planning, Sir Patrick Geddes, and contains the world's largest concentration of buildings constructed in the "Bauhaus International Style", with over 4,000 constructed from the 1930's until the establishment of the State. The designs of European schooled architects created a new, enriched and versatile language of style, characterized by asymmetry, functionality and simplicity. Balconies, columns, flat rooftops and picturesque windows have enhanced the city for decades as classic marks of identification.

Minted at the Jerusalem's Israel Government Coins and Medals Corporation Mint with Star of David's mintmark.

This coin was awarded second place in the "Vicenza Palladio" International Contest, held in Italy.

Bullion value: USD 10.35 Search tips
This value is given for information purpose only. It is based on a price of silver at 777 USD/kg. Numista does not buy or sell coins or metal.