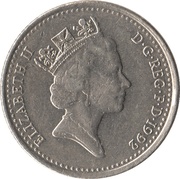 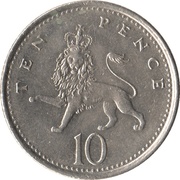 Part of the crest of England, a lion passant guardant royally crowned, legend above, denomination below.

In 1992 the ten pence was reduced in size to begin the process of demonetising the larger 10p which, alongside pre-decimal florins, were finally taken out of circulation in 1993. 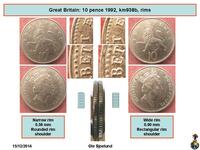 For further information and images please visit Tony Clayton's website
Following are a couple of specific links for the 10p varieties pages: