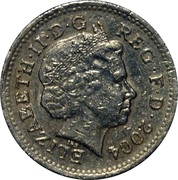 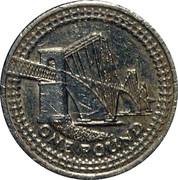 A representation of the Forth Railway Bridge inside a border of railway tracks.

Milled with a decorative pattern symbolising bridges and pathways

The first of  four Edwina Ellis bridge designs, representing  Scotland, the Forth Railway Bridge is a cantilever railway bridge over the Firth of Forth in the east of Scotland, 9 miles (14 kilometres) west of Edinburgh city centre. It is considered an iconic structure and a symbol of Scotland (having been voted Scotland's greatest man made wonder in 2016) and is a UNESCO World Heritage Site.

A second silver edition with selective gold plating was issued in 2008 to celebrate 25 years of the pound coin
(former Spink ref. 4595)