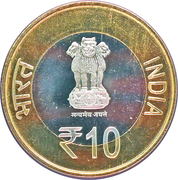 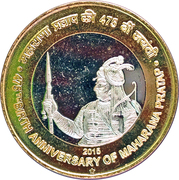 Bust of Maharana Pratap in the center and the date below his bust.