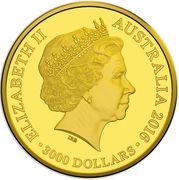 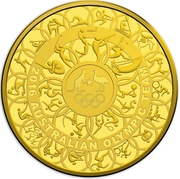 No sporting event is as big as the Olympic Games. In August 2016, the nation will be cheering on the inspirational Australians who are living out their sporting dreams in front of a worldwide audience.

The Royal Australian Mint takes pride in marking significant Australian sporting milestones and is honoured to be an official team partner for the 2016 Australian Olympic Team.

The coin design is both delicate and intricate and displayed to great effect on the large coin surfaces. The Australian Olympic Team logo takes centre stage on each coin. Further fluidity of movement is provided by pictures of athletes in motion from the official Olympic sporting pictograms of the 32 disciplines that Australian athletes will contest in Rio.

Bullion value: 57,083.49 USD Search tips
This value is given for information purpose only. It is based on a price of gold at 57,141 USD/kg. Numista does not buy or sell coins or metal.