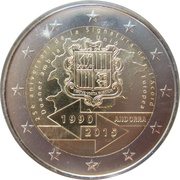 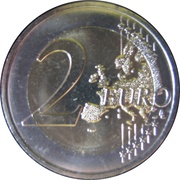 The design shows at the top the map of Andorra with the coat of arms of the Principality highlighted inside it. At the bottom of the design, two opposing arrows interlaced, symbolising the Customs Agreement between Andorra and the EU, show the years that are being commemorated ‘1990’ and ‘2015’ (the latter is also the year of issue of the coin) and the name of the issuing country ‘ANDORRA’. Surrounding the map of Andorra appears the inscription ‘25è aniversari de la Signatura de l’Acord Duaner amb la Unió Europea’ (25th anniversary of the Signature of the Customs Agreement with the European Union). 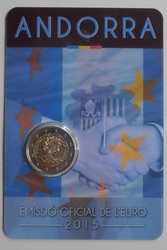