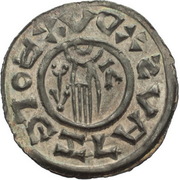 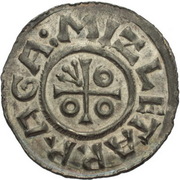 Boleslaus II. the Pious (Czech Boleslav II. Pobožný) was duke of Bohemia from 967/972 until his death in 999. He is commemorated as a founder of first monastery in Bohemia - St. George's at Prague castle. Moreover, Prague bishopric was established during his rule in 973. He also completed the unification of Bohemia under Přemyslid dynasty by eradicating the rival Slavník dynasty on 28. September 995.

» Buy coins from the Royal mint of Bohemia