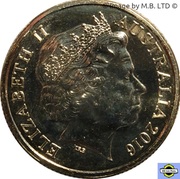 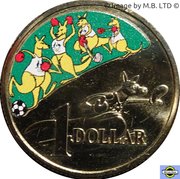 This NCLT coin was made available by the Royal Australian Mint to commemorate the participation of the Australian Olympic Team at the Rio 2016 Olympics. It was released in three different presentation packs.
Blue pack featuring  Thomas Fraser-Holmes for Swimming.
Green pack featuring Patrick Mills for Basketball.
Yellow pack featuring Melissa Breen for Athletics.

The coin was exactly the same coin in the three packs and was encapsulated in a gold ring and had a ribbon attached so that it was similar to an Olympic medal.