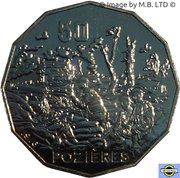 The Royal Australian Mint is producing a series of NCLT 50 cent coins to commemorate the battles of the Western Front that Australian soldiers took a major part in during WW1. They were released on a coin card.

This coin relates to the capture of the small village of Pozieres which was Australia's main contribution to the battle of the Somme in mid 1916. After falling to the Australians on 23rd July, Pozieres was reduced to rubble by concentrated German bombardment as fighting continued through August. In just six weeks the Australians had suffered a staggering 26,000 casualties. Charles Bean, an official war historian, has described Pozieres as being "More densely sown with Australian sacrifice than any other spot on earth".